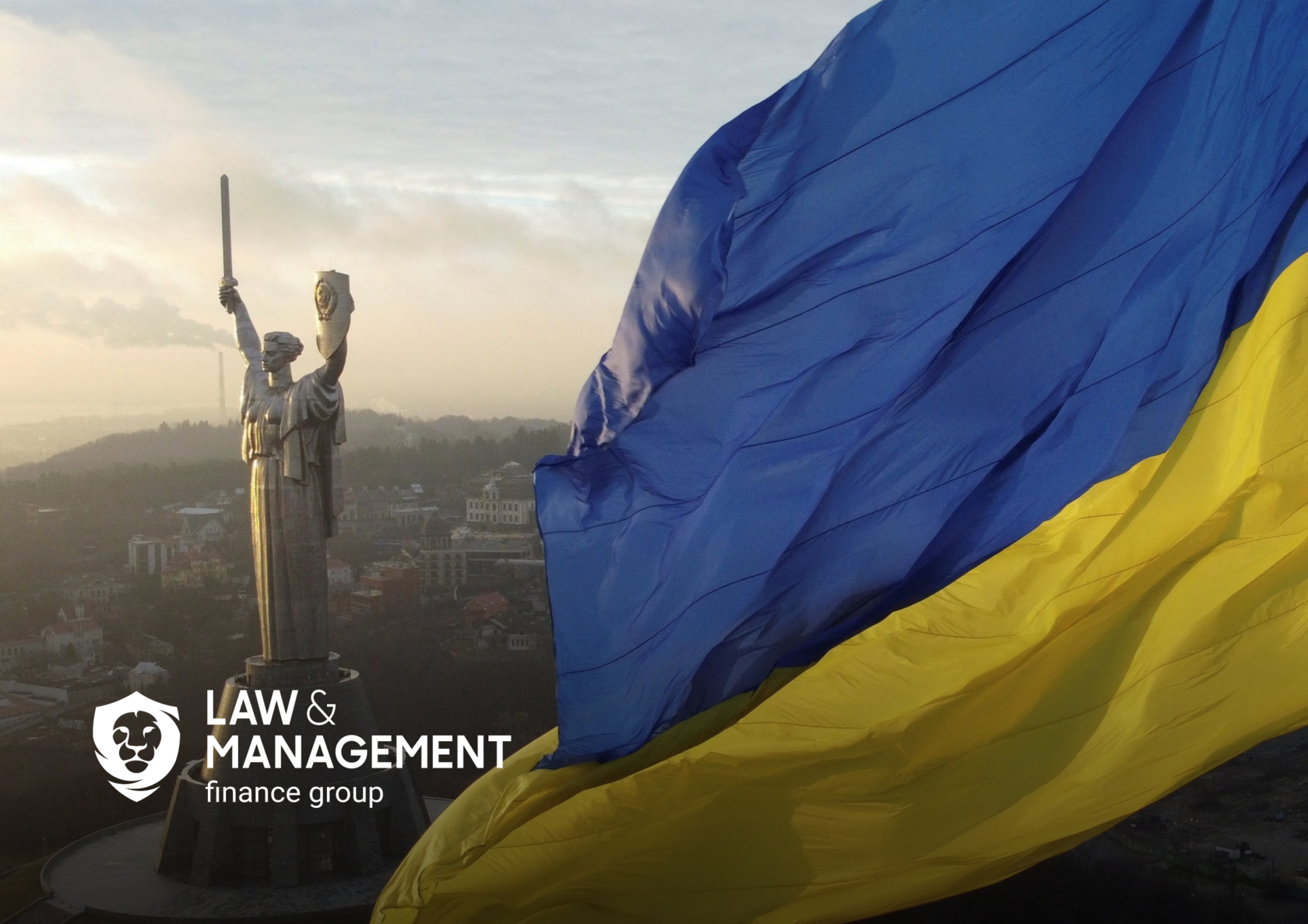 Starting from February 24, 2022, the authorities introduced a number of amendments to the legislation of Ukraine on the creation of special conditions to support the country and the economy as a whole. Given the large number of adopted laws, regulations and other legal documents created for various areas of law, the Team of Law & Management Finance Group have decided to hold a digest of all developments related to changes in the entire legal area.

2.     A new list of critical imports has been added:
The Cabinet of Ministers adopted Decree No. 362 of March 26, 2022 on amending Decree No. 174 of March 1, 2022. Thus, the list of humanitarian aid goods has been updated, to which a separate procedure for crossing the customs border of Ukraine is applied, such as military ammunition. According to the Decree, that only a letter of guarantee from the end user is required to transport these goods.

3.     Improving the declaration form for the list of goods recognized as assistance:
Decree of the Cabinet of Ministers of April 6, 2022 No. 409 was adopted on amending Decree No. 174. This decree introduces automated accounting of goods imported as humanitarian aid, as well as the use of IT tools (QR-code, barcode, digital code etc.) in case of filing a declaration in paper form. This will free up time for the physical registration and transportation of relief vehicles.
In addition, this resolution introduces certain terms used in international practice.

4.     Tax reform 2022:
The Verkhovna Rada adopted Law No. 2142-IX dated March 24, 2022 (which entered into force on April 5, 2022) on amending the Tax Codex and other legislative acts of Ukraine on improving legislation for the period of martial law.
The main changes in the legislation include:
- Exemption from import duties (does not apply to imports from aggressor countries and occupied territories, alcohol, tobacco products and electronic cigarette liquids)
- Exemption from payment of import duties, excises and VAT when importing vehicles by individuals
- Exemption from VAT on the import of goods by "simplified" groups I-III (during martial law)
- Cancellation of the mandatory submission of permits for the import of special groups of goods (sanitary, environmental and others) determined by the Cabinet of Ministers. Information about them must be entered directly into the customs declaration.
With regard to the main changes for VAT payers during the transition to a simplified tax system:
- Registration as a VAT payer is suspended (NOT CANCELLED)
- It is forbidden to trade goods with aggressor countries and occupied territories;
- The date of transition to the simplified system is the date specified in the application;
- For all goods purchased with VAT before the transition to the simplified system and used during the stay on the simplified system, after the end of martial law, VAT will need to be calculated.

5.     Features of the simplified tax regime:
On April 16, 2022, the Law of Ukraine dated April 01, 2022 No. 2173-IX came into force , among the main changes made to the Tax Codex, provided, in particular:
- Adding a list of operations for imports into the customs territory of Ukraine and deliveries to the customs territory of Ukraine, which are exempt from VAT for the period of martial law in accordance with the law (clause 32, subsection 2, section XX "Transitional Provisions" of the Codex);
- addition of paragraph 63 of subsection. 4 of Section XX "Transitional Provisions" of the Code, according to which this is not a violation of the requirements of a. 133.4 Art. 134 of the Code for the provision of charitable assistance by non-profit organizations to individuals who have no connection, the founders, participants of such organizations, in the territory of settlements where hostilities are taking place, and / or are forced to leave their place of residence in connection with the implementation of hostilities in such settlements;
- Creation of a temporary state of emergency on the territory of Ukraine from March 1, 2022 until the end or cancellation of the state of emergency on the territory of Ukraine for electricity producers in order to determine tax liabilities for excise tax on the date of crediting (receiving) from funds to a bank account or on the date of receiving other types of compensation for sold electricity ( clauses 38 and 38¹ of subsection 5 of section XX "Transitional Provisions" of the Code);
- removal of restrictions on the volume of income when choosing a single tax of the third group at a rate of 2% of income;
The State Tax Service of Ukraine has prepared topical questions and answers on the transition to the simplified system of the third group at the rate of 2%.

6.     Exemption from taxes during martial law:
On April 5, 2022, Law 2142-IX was adopted , which provides for a number of changes, in particular:
- exemption of individuals from import duties, excises and VAT;
- exemption from VAT on the import of goods by "simplified" groups I-III (at a rate of 2% at the time of martial law);
- Cancellation of mandatory import permits for special groups of goods (sanitary, environmental and others) determined by the Cabinet of Ministers. Information about them must be entered directly into the customs declaration;
- 2021 and 2022 tax on residential property located in the territories where there is a war and in the occupied territories is not paid (from March 1 to December 31, during which there will be an end to martial law, tax on non-residential property located in the territories of hostilities, not paid);

7.     Payment of environmental tax in wartime:
In accordance with the adopted Law No. 2142-IX, the State Tax Service explained further actions for the period of the military situation in the country.
So, according to the Decree of the President of Ukraine "On the introduction of martial law in Ukraine" dated February 24, 2022 No. 2102-IX, the environmental tax is not calculated and not paid by the taxpayers of this tax, it is registered (fixed) at the location of stationary sources of pollution, for the creation of radioactive waste and temporary storage of radioactive waste in the territories where actions are (are being) carried out and in the territories temporarily occupied by the armed formations of the Russian Federation.
In particular, the environmental tax on all volumes and types of pollution, which is carried out by stationary sources of pollution, provided for by the legislation of Ukraine, and on all volumes of radioactive waste generated and volumes of temporary storage of radioactive waste, will not be calculated and will not be paid for I, II, III and IV quarters of 2022.


TRANSPORT LAW
1.     Since February 29, 2022, Ukraine has managed to negotiate with neighboring countries (Poland, Slovakia, Hungary, Moldova) on crossing the border without the so-called Green insurance policies. Card . In addition, Ukrainian border guards will not require such a policy in accordance with the instructions of the Ministry of Foreign Affairs of Ukraine.

2.     On March 12, 2022, the Cabinet of Ministers adopted a resolution in which it simplified the registration of agricultural machinery and mechanisms during martial law. Thus, the temporary registration procedure provided for the reduction of the list of documents to a minimum and registration according to the principle of extraterritoriality.


3.     On March 25, 2022, the Ministry of the Interior announced the extension of the validity period of the UNCLOS certificates, which are allowed for the transport of dangerous goods. Such documents will come into force within nine days from the date of the abolition of the military situation in the country, the Ministry of Internal Affairs reported .

4.     As of April 4, the Ministry of Infrastructure managed to agree on the cancellation of bilateral and transit permits for international transport in the territory of six countries of the European Union, in particular from Bulgaria, Hungary, Denmark, Italy, Latvia, Estonia, Georgia and Turkey. Slovakia also agreed to transit traffic without permits. In addition, there is a mechanism for the transport of all humanitarian cargo without time limits for delivery with Moldova, Romania, Slovenia, Austria, the Czech Republic, Poland, Germany, the Netherlands and Lithuania.


5.     On May 10, 2022, Ukraine and Poland reached an agreement on the free passage of fuel cargo. To enter Poland without the permission of fuel carriers you need to register by filling out the appropriate form .


LAND LAW
1.     Creating conditions for food security due to martial law:
On March 24, 2022, Law No. 2145-IX was adopted , which introduces simplified legal mechanisms for regulating land resources. Thus, this law created the state registration of contracts, on the basis of which the rights of lease and land subcontracting will arise. This process is carried out by the district military administrations in each region and is recorded in the register of land ownership and land use.
The form of the registration book was approved by the order of the Ministry of Agrarian Policy dated April 11, 2022 No. 219, registered with the Ministry of Justice on April 15, 2022 No. 429/37765.
For full familiarization with the new law, the Ministry of Agrarian Policy has prepared an information letter explaining the application of the law and factual questions and answers.

2.     Lease of municipal and state property:
On May 13, 2022, the Verkhovna Rada adopted a law aimed at introducing special conditions for regulating land relations as part of supporting enterprises that are forced to move (evacuate) their facilities to safe areas. The opportunity provided in a simplified version and without any associated losses to establish and change the purpose of land plots; to obtain plots of state and communal property for rent to accommodate evacuated production facilities; build river and sea ports, railway and logistics centers, power supply networks, gas distribution, water management, heat supply, sewerage, electronic communications, main gas pipelines, commercial agriculture.
The Ministry of Economy has published an application and a platform for interaction on a special program for the movement (evacuation) of enterprises from the war zone. Not only large enterprises can become a participant, but also small enterprises located in the combat zone.


WATER RESOURCES LAW
1.     Restoration of work and improvement of the procedure of the State Water Cadastre:
The Cabinet of Ministers of Ukraine approved changes in the procedure for maintaining the state water cadastre. The document was developed in order to implement the decision of the NRC on the state of Ukraine's water resources, which was adopted by Decree of the President of Ukraine dated August 13, 2021 No. 357.
Thus, the issue of electronic interaction between the ecosystem and the State Water Cadastre was settled; administrative processes were streamlined to simplify the provision of environmental services.
Currently, there is limited user access to the ecosystem - it is moving to the cloud platform and infrastructure of Microsoft Azure Corporation. This will ensure the stability of its activities and the protection of information. So we will soon have a super fast and super secure ecosystem with a range of new process and data management features.

2.     On March 15, 2022, the President of Ukraine signed two laws on the legalization of the cryptographic sector, in particular:
- The Law on Virtual Assets , which will allow launching the legal market for virtual assets in Ukraine.
foreign and Ukrainian crypto exchanges will work legally;
banks will open accounts for crypto companies;
Ukrainians will be able to declare their income in virtual assets.

- the law on cloud services , which will increase the efficiency of the use of public resources, will stimulate the introduction of innovations in government bodies and will regulate the use of the latest cloud technologies.
1) reduce the burden on government agencies responsible for protecting information;
2) reduce the risk of corruption in the procurement of equipment;
3) significantly reduce budget expenditures;
4) accelerate the introduction of innovations in government bodies.
© All rights reserved. L&M Finance Group
The content of this website is provided for general information purposes only and is not a legal or other professional advice or conclusion. Users of this website are advised to apply for legal advice by contacting L&M Finance Group LLC for any specific legal issues. L&M Finance Group LLC does not guarantee the quality, accuracy and completeness of any information on this website. Access to this website or the use of this website does not create a relationship between a lawyer and a client. Although the use of your website may facilitate the access or communication with L&M Finance Group LLC by email or otherwise through the website.
Private Policy
Linkedin
01001, Kyiv, Sportyvna sq., 1А, Gulliver (BC)
office@lmfgr.com
+38 (068) 108-48-81